After a year in the history books, Mamdouh ‘Big Ramy’ Elssbiay surpassed all expectations and became the 16th person to win the heavily contested Mr. Olympia title 2021 and hold the gigantic Sandow trophy. The competition was held in Florida with a live audience.

Just last year, Big Ramy became the second Arabian bodybuilder to be crowned Mr. Olympia since the contest began in 1965. Samir Bannout, famously known as the ‘Lion of Lebanon,’ won the title in 1983.

Born in Kafr El Sheikh, Egypt, in 1984, Big Ramy began his professional bodybuilding career in Kuwait in 2010. He, as of 2021, won several international competitions, including the New York Pro and Arnold Classic Europe.

Read More: 10 Superfoods for Muscle: How to Build Muscle After 40

Saturday night culminated with an unforgettable Olympia weekend with Big Ramy bagging the hotly contested Mr. Olympia 2021 title. After a whirlwind of speculations and talks, In conclusion, Big Ramy defended his title and edged out his most significant competitors, Mr. Olympia 2019 champion, Brandon Curry, and the crowd favorite, Hadi Choopan.

Even though Mamdouh did not come in the best conditioning during the pre-judging rounds, he seamlessly made up for it at the individual posing round and the showdown on Saturday.

There has been a new Mr. Olympia champion since 2018 when Phil Heath lost his reigning title to Shawn Rhoden. Nevertheless, Big Ramy, who also bagged the title in 2020, stopped the Sandow trading. 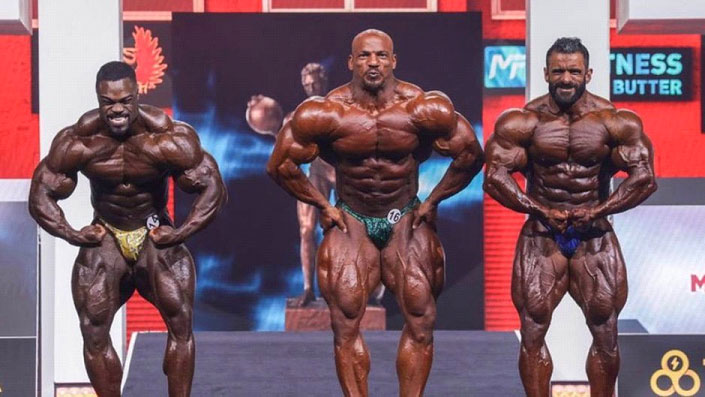 He stirred up excitement at Mr. Olympia 2021’s press conference with his ‘winter is coming’ catchphrase (a popular Game of Thrones dialogue). He repeated the phrase before bagging the title and wowed his fans by posing the GOT’s soundtrack during the pre-judging round on Friday.

The bodybuilding event is undoubtedly the most prominent attraction of the Olympia weekend. Therefore, every athlete who bags the heavily contested title is considered one of the best, scratch that, greatest bodybuilders of all time. It is one of those titles that deserve a page in the world book of records.

Even though the championship consisted of 19 athletes, Big Ramy, Brandon Curry, Hadi Choopan, Hunter Labrada, and Nick Walker were considered the frontrunners of Mr. Olympia 2021 title.

Read More: How to Commit to Your Fitness Goals for 2021

All you need to know about – Mamdouh “Big Ramy” Elssbiay – Mr. Olympia 2021 Winner

For those who are familiar with the bodybuilding arena, Mamdouh Elssbiay, aka “Big Ramy,” is not a new name. For everyone else, reading this name for the first time, Mamdouh Elssbiay – born in Al-Sebea near Baltim city in Burullus district, Kafr El Sheikh Governorate. He worked as a fisherman, where he went to Kuwait before he started to train professionally.

Elssbiay earned his pro card by winning the overall title at the 2012 Amateur Olympia in Kuwait City, just three years after he started training. In 2010, Elssbiay joined Oxygen Gym in Kuwait. By 2011, he weighed 200 lbs, and when he stepped on the 2012 Amateur Olympia Kuwait stage, he weighed in at 286 lbs and was declared the champion. In 2013, Elssbiay made his IFBB Pro-debut at the New York Pro, which he won. In 2020, Elssbiay won the Mr. Olympia title, which he then defended a year later in 2021.

In October 2020, he tested positive for COVID-19, which prevented him from participating in the 2020 Europa Pro Bodybuilding Championships.

Big Ramy was the defending champion at Mr. Olympia 2021. He looked way better – dryer and harder, compared to what he did at pre-judging. Big Ramy’s posing routine was flawless and a treat to watch.

Mamdouh Elssbiay strutted to center stage, sporting a goatee, and every eye in the building focused on his every pose. Fans were moving closer to the front to get pictures of Mr. Olympia as he performed the mandatories. The bass of the music shook the room, coincidentally timed with every shot he hit.

Fun Fact – Mamdouh Elssbiay aka “Big Ramy” is now the first non-American to win the title since 1997.

The Big Ramy diet is an enormous meal plan. As someone who weighs around 300 pounds, it’s essential that he eats enough calories throughout the day. What makes things more challenging is that Big Ramy burns a lot of calories from training.

This is where supplements can help. 2-3 scoops of whey protein and Casein protein provide him with valuable calories that are lost in training. Mamdouh Elssbiay’s diet undestands that the more calories he burns in training need to be replenished with food.

We see in this diet that protein, carbs, and fat are also included. Diet has chicken, eggs, salad, protein shake, peanut butter, brown rice. So guys, this is some information about the Big Ramy diet. If you want to try the meals listed above, you can adjust according to your weight.

Here is a list of the top five Mr. Olympia participants and their profiles:

Here are Mr. Olympia 2021 finalists and their prize money:

Big Ramy was the reigning champion at Mr. Olympia 2021. He looked better than his competitors – dryer and harder, compared to his appearance at the pre-judging. Mamdouh’s posing was also effortless and fascinating to watch.

Brandon Curry came to the championship with the aim of re-bagging the Mr. Olympia title, and he did come close to reclaiming it. He had seamless balance, musculature, and symmetry amongst all other Mr. Olympia 2021 participants.

According to various news sites and bodybuilding enthusiasts, no other Mr. Olympia contestant has back and quads like Hadi Choopan. He was also the only athlete to pull off a vacuum pose.

Hadi Choopan is a fan favorite, and he proved this by bagging the People’s Champ Award two times in a row.

Hunter Labrada has an incredible genetic structure. However, one of the things that bagged him fourth place was sweating during the prejudging posing round.

Walker was undoubtedly the best poser in Mr. Olympia 2021 championship. His posing coach deserves a trophy. Walker’s muscle maturity at only 26 years also justifies his moniker ‘Mutant.’ The event was one heck of a debut for him.

Read More: Best and Effective Workout Tips of All Time

Apart from the Mr. Olympia championship, the events held during the competition included:

With the 2020 Bikini Olympia titleholder, Janet Layug, out of the 2021 competition, the door was open for a new winner.

Moreover, all three took turns to wow the judges, with the head judge Sandy Williamson complimenting them on the challenging decision that would have to be made to determine the champion. By the end of the night, the top five Bikini Olympia Champions were:

After the callouts, the athletes performed their routines, and the following were named the top five Classic Physique Olympia winners:

Brandon Hendrickson, a Men’s Physique Olympia champion, did not want to repeat his performance in 2019, where he went in as the reigning champion but lost his throne to Raymont Edmonds. Although he reclaimed his throne in 2020, he knew he had to bring his A-game in the 2021 championship.

According to the pre-judging, Kyron Holden, who appeared in incredible shape, was Hendrickson’s most significant competitor. It made the decision difficult for the judges, but by the end of the night, the Men’s Physique Olympia winners were:

This was another heavily contested event, with top athletes like Clarida, Kamal Elgargni, and Derek Lunsford stealing the spotlight. By the end of the night, however, the judges crowned these champions as the Men’s 212 Olympia winners:

Other events are coming up, but the most anticipated is the Dubai

The exhibition event will run from Thursday to Saturday, October 28th to 30th. In collaboration with IFBB Pro Elite, AED75, 000-prize money, and 18 Pro Cards will be up for grabs together with food, gym, and clothing sponsorships.

The event’s categories will include:

Pre-Workout Nutrition: What To Eat Before A Workout